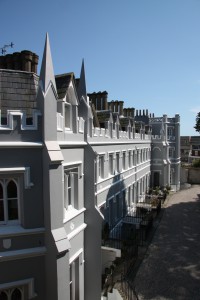 Lawyers have sent two letters to the Council on behalf of residents and local groups following the Council’s granting of planning permission for the tall six storey hotel on the site of the former ice rink on the southern boundary of the churchyard.

For those not already aware, the Planning Committee was branded by the press as a ‘shambles’ with members confused; the first vote to refuse permission being retaken once campaigners had left, officers misdirecting members during the voting and underplaying important information in the officer report and presentation.

The officer report and presentation made no mention of the churchyard being an important local park and relied on the developer’s view that the need to chop back important ancient elm trees was of little significance. All of which sets a very dangerous precedent for both future Brighton & Hove applications and national planning policy.

This led locals to believe the process was seriously flawed. The

Council administration are so determined to rail-road this development in

the site with planning permission, that serious local objections to the

way the Planning Committee handled the application would not be allowed

to stand in their way.

reports. The lawyers concluded the decision was unlawful and detailed

their findings on six pages of failures. They formally advised the

Council that the first vote to refuse planning permission should be

upheld as the only lawful decision the committee took. Alternatively

dealt with properly. The lawyers’ findings cited case law and other

Sadly, the Council’s officers refuse to accept the wrong doing and their

lawyer merely brushes over many of the failings and unlawful procedures

set out in the residents’ lawyer’s letter.

Residents’ lawyers have demonstrated how the Council could and should

lawfully refer the application back to the Planning Committee to

and interest groups being able to have their say.

prevents this – their protestations that they cannot intervene are wrong

Leader, Jason Kitcat, to lobby for the return of the hotel application

would be the correct, legitimate, and only lawful and honourable action