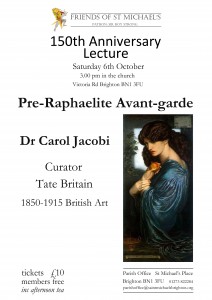 Carol Jacobi, one of Tate Britain’s senior curators and an expert on the pre-Raphaelite movement, is giving a talk at St Michael’s on Saturday 6th October. Ms Jacobi was one of the organisers of Tate Britain’s latest exhibition Pre-Raphaelites-Victorian Avant-Garde, which opened in London in September.

The talk is part of the Friends of St Michael’s continuing fund-raising efforts. The Friends are raising money to carry out urgently needed work to stabilise the stained glass windows which are one of the glories of our only Grade-1 listed building.

The lecture is at 3.00pm on Saturday 6th October. Admission is £10 and includes tea and cake.

Twentieth-century research has recast the Pre-Raphaelite Brotherhood as radicals, writes Carol Jacobi. In 1848 revolutions swept through nearly every country in Europe and seven students banded together to generate a revolution in art. The Pre-Raphaelites were the first to self-consciously style themselves as ‘Young British Artists’ wrenching British painting away from convention and dependence on European Old Masters.

The Pre-Raphaelites lived at a time of tremendous industrial and economic change when everything was being redefined – work, society, beliefs. The men and women in the Pre-Raphaelite circle experimented with all of these; their convictions, lifestyle and relationships were as radical as their art. Their passionate, anti-establishment personalities matched the daring stories and extreme techniques of their dazzling and sometimes disturbing paintings.