Having been brought down by heavy rain and strong winds earlier this year the (privately owned) flint wall at the corner of Vine Place and Dyke Road has been beautifully restored using traditional lime-based mortar. Unlike modern cement-based mortars, lime mortars allow walls to breathe, moisture to evaporate and fine cracks to “heal”.

This is especially important when repairing old brick walls but is also important with harder materials such as flint.

For a third season flowers will enhance our conservation area thanks to the MCHA’s successful bid to the Co-op Community Fund.

Whilst the picture shows a previous year’s display the baskets now in place will soon develop into a similar spectacular display which can be enjoyed by residents, visitors and those now returning to work in the area, many of whom enjoy their breaks on the green of Montpelier Terrace opposite.

The plaque at 11 Clifton Road commemorates Edward Bransfield RN who made the first discovery and charts of the Antarctic mainland in 1820. Rear Admiral Lippiett a former Brighton and Hove Grammar School pupil, is pictured with two former mayors of Brighton and Hove at a reception held in Montpellier Hall after the unveiling.

After heavy rain and strong winds, a retaining garden wall collapsed at the corner of Dyke Road and Vine Place.

The wall, of attractive flint cobbles, appeared to be in good condition but may have lacked enough drain holes to cope with the exceptional volume of water combined with gale force gusts of wind.

It is a timely reminder to all of us with flint and “bungaroosh” walls to ensure that they are properly maintained and inspected for any signs of weakness, particularly if tree roots have undermined them.

This existing five storey 1960s block next to the Waitrose vehicular access on Montpelier Road is widely considered an eyesore and the addition of a storey would have added further harm to the character of the conservation area and the setting of listed buildings nearby.

The building already has approval for conversion from office use to residential and for cladding to facilitate this conversion.

Download a copy by clicking here or view below 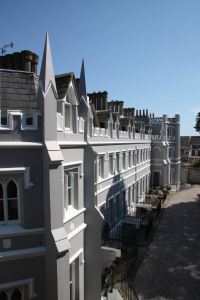 PLANS to build a six-storey block of flats on the old ice rink site in Queen Square have been thrown out by a government planning inspector.

Developers Stonehurst Estates wanted to build a block of 31 flats on the site with offices and other commercial uses on the ground floor. The council’s planning committee narrowly rejected this proposal in October last year, but the developers appealed..

The MCHA has consistently objected to a six-storey building on this because of the damaging impact it would have on both the conservation area and the listed buildings Wykeham Terrace, the churchyard of St Nicholas and the church itself.

Now David Prentis, a government planning inspector, has thrown out the appeal on precisely these grounds. His report was published last week. “In my view,” says the inspector, the height, scale and horizontal emphasis of the proposed building, combined with its proximity to the site boundary, would result in a very dominant presence on the edge of the churchyard…This would have a harmful effect on the relatively open nature of the churchyard, detracting from the quality of the green space and the contribution it makes to the character and appearance of the conservation area. Given that the churchyard forms a key element of the setting of the Church, it follows that the setting of the Church would not be preserved.”

He also heavily criticises the impact on Wykeham Terrace. “The height of the new building would be well above that of the terrace and it would be in relatively close proximity. I consider that the new building would dominate the skyline in such views, competing with and distracting from the dramatic roofline of the terrace. This would be harmful to the setting of the listed terrace.”

He also condemns the impact that a six-storey building would have on Wykeham Terrace. “On the second main issue, I conclude that the proposal would be harmful to the living conditions of nearby residents at Wykeham Terrace, in that it would cause an unduly overbearing and enclosing effect, and at No 10 Queen Square where there would be a loss of privacy.”

“In conclusion,” says the inspector, “the proposal would be harmful to the significance of the listed church, the listed terrace and the conservation area.”