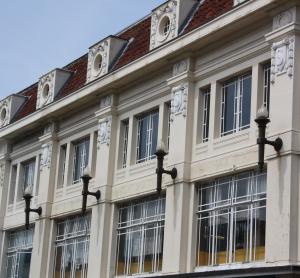 The result of this widening was the loss of some historic Regency and early Victorian buildings, similar to those on the south side of Western Road, which was not affected by the widening. But these lost buildings  were replaced by some fine art deco buildings, which despite more modern shop fitting at street level are still remarkably intact above the ground floor.

When the Montpelier and Clifton Hill Association was founded in 1970 it adopted Western Road as its southern boundary, partly in recognition of the architectural merit of many of the interwar buildings on Western Road. When the council established the boundary of our conservation area it concentrated on Regency and Victorian buildings in the heart of our area and excluded  the north side of Western Road.

The first tangible sign of the corporation’s road widening plans came in 1900 when the London and Provincial Bank added a typical bankers’ facade to the early Victorian villa on the corner of Hampton Place and Western Road. This facade was set back to the new widening line. The London and Provincial was taken over by Barclay’s Bank and when the bank closed the Post Office took over the building in 1973.

Then in the early years of the 20th century the corporation bought the rest of the houses on this block, including Codrington Place, a terrace of nine houses with long front gardens leading to Western Road.     Three of these houses were demolished to make way for the Electric Bioscope, which opened in 1909. It closed in 1979 and was in turn demolished to make way for Waitrose. The site on the corner of Montpelier Road was redeveloped shortly before 1914 and became the Labour Exchange. The building still stands and it is now part of Waitrose.

After the Great War Brighton Corporation stepped up the pace of road widening. In little more than nine years, between 1926 and 1935 the north side of  Western Road from Hampton Place to Imperial Arcade was demolished wholesale and replaced by art deco shops.

Perhaps the most handsome of these new buildings is on the block between Crown Street and Dean Street. This was built between 1926 and 1927 and has distinctive electric torches at first floor level. The monogram “S” on the shields at the east end of the block, which continue round into Crown Street, are a souvenir of the building’s original occupier—Stafford’s Bargain House—a general department store and stationer. Stafford’s only ever occupied the eastern end of this block and the shields at the Dean Street end do not have a monogram—and never have had. Poundland currently occupies Stafford’s old premises.

The next block to be redeveloped stretched from Dean Street to Spring Street. It dates from 1927-28 and was built for Boots the cash chemists. It was built in a neoclassical style with a stone facade, which has become rather pockmarked from the effects of  the weather and pollution.

The heavy and rather fascist- inspired building between Crown Street and Marlborough Street was originally built for British Home Stores in 1931. Today it houses Primark. When it was built, the central header had both the date and the initials BHS but these were removed in around 1970 when C&A moved into the shop.

Mitre House occupies the block between Spring Street and Hampton Place. It was designed by the London-based architectural firm of Stanley Beard and Bennett and built for International Stores (whose logo was the mitre). Stanley Beard and Bennett specialised in designing art deco cinemas.  When it opened in 1935 International Stores was the largest grocery shop on the south coast. Despite the unprepossessing shop fronts at street level the facade above has changed little and the six-storey south block is an impressive presence in the view up Preston Street from the sea.

The final piece of road widening came in about 1934 when a couple of buildings at the east end of Western Road were demolished. This pinch point was popularly known as “the Dardanelles”, because in popular mythology it was a cause of traffic jams—although photographs from the time don’t show any major snarl-ups—at least not by today’s standards.

For most of the 20th century the fashion was to widen roads to make way for traffic. In Brighton it culminated with the notorious “breeze into Brighton” plan—with the widening of Montpelier Road.     But fashions in traffic engineering have changed. Today the ethos is to create pinch points to slow up vehicles and reduce the volume of traffic. In recent years the council has widened the pavements on the north side of Western Road—and reduced the width of the road. At its narrowest, close to the junction of Regent Hill, the road just about as wide as it was in Victorian times.