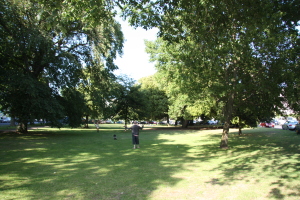 SEPTEMBER in 1843 was extremely hot, writes Mick Hamer. Or as The Times rather quaintly put it, there was an unusual “elevation of the temperature”, as the mercury climbed to reach 86 °F in the capital. But the heatwave came to an abrupt end on 25 September.

It was the end of the season in more ways than one. For it was the last time that top-class cricket was played on Lillywhite’s grounds. Not long after the three-day match ended on 27 September the developers moved in and started building the houses in Montpelier Crescent (see photo).

The final match was between the gentlemen of Sussex–a team of well-heeled amateur cricketers–and the professional players of Sussex, led by the county’s veteran bowler William Lillywhite, one of the most famous cricketers of the age. Not only was the cricket field named after him but he was also the father of John Lillywhite who is generally thought to have founded the London sportswear firm.

Even though the finest cricketers in Sussex had been assembled for the final match of the season the crowd was sparse because of the suddenly chilly weather. But the match was still important enough to be reported in the London papers, as well as in the local press.

Lillywhite, a stocky powerfully built man, was one of the leading exponents of the round arm style of bowling, in which the bowl is delivered at shoulder height. Round arm bowling had superseded the older underarm technique and was itself replaced by overarm bowling in the latter half of the 19th century–although W. G. Grace continued to bowl round arm until he retired in 1908. Such was Lillywhite’s success with the ball that he was known as “non-pareil”.

Lillywhite opened the bowling for the players. But after an early success Lillywhite, who had celebrated his 51st birthday that June began to tire. The gentlemen’s middle order batsmen began to take root and score freely. “Hawkins afforded the spectators a rich treat by his scientific style of batting,” reported The Standard. “He hit the non-pareil’s balls in every direction.” Hawkins scored 59 runs before Lillywhite eventually bowled him out. Hawkins did even better in the second innings, scoring 72 and the gentlemen ended up winning the three-day match by 16 runs.

Cricket was certainly played on the grounds for much of the 1830s. The first recorded match took place in 1831. Scorecards from first class matches on Lillywhite’s grounds survive from 1838 onwards and the Sussex Advertiser, carried regular reports of matches played on Lillywhite’s grounds. The matches range from a local derby between a side from Hove and 11 inhabitants of Preston Street (Lillywhite owned the Royal Sovereign public house in Preston Street) to a three-day match between Sussex and an All-England side at the end of August 1842.

This was Lillywhite’s benefit match–held to celebrate his 50th birthday as well as recognising his contribution to cricket. It was the first time that any cricketer had been given a benefit match. Sussex won by 6 runs and Lillywhite took a haul of nine wickets during the match.

Lillywhite’s grounds, which was also known as Lee’s Trap ground, was also used for other sporting events. According to The Morning Post in August 1834 “Coates, the pedestrian, picked up with his mouth on Lee’s trap-ground, Brighton, one hundred eggs one yard apart and put each singly into a basket…” The report doesn’t say if any of the eggs were broken, but maybe that was just part of the spectacle.

Clearly the spectators, whose interest in these events was more speculative than sporting, weren’t that enthused. The 6 miles-per-hour walk which Coates was scheduled to make later in the day was abandoned because of the lack of gamblers.

Work on building the new villas in Montpelier Crescent began in the autumn of 1843 and the crescent was finished by 1847. It was the end of first-class cricket on Lillywhite’s grounds. The builders used the former cricket field as a store for their materials.