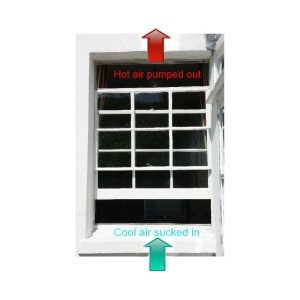 All the design features of Brighton’s period houses—those fireplaces, the draughty sash windows and those thick walls—that make the houses so hard to heat in winter, make them a really cool place to be in the middle of a heatwave.

And the other big plus is that you don’t really need to do much to stay cool—provided your windows work and your fireplaces haven’t been bricked up. In the long run, making sure the windows work when you want them will be a whole lot cheaper and far more effective than nipping down to Argos and buying an emergency air-conditioning unit.

The fireplaces alone make an impressive contribution to Regency cool. According to the government’s Building Research Establishment an open chimney pumps out hot air at the rate of 40 cubic metres an hour. And if you find 40 cubic metres hard to visualise, it is roughly the size of a typical double bedroom. So a room in a Regency house will have a fresh change of air every hour—sucking in cool air and pumping all that hot air out of the chimney.

But one of the key advantages of a period house in a heatwave is the sash windows—provided that they work and that you know how best to use them.

Sash windows were designed to maximise the airflow through a room, pumping out the hot air and sucking in cooler air. But very few people know how to use them to greatest effect. If you walk around the conservation area on a hot day you’ll see lots of open sash windows. But most people either push up the bottom sash or pull down the top one. Opening just one window isn’t terribly effective because the block of cool air that is trying to get into the house is struggling against a block of warm air that is trying to get out.

How to use them effectively would have been second nature to our Victorian and Regency ancestors but it is now almost a completely forgotten science. But research by environmental scientists at London’s Imperial College carried out during the heatwave of 2003 shows that it is most effective to pull down the top sash and slide up the bottom sash so that that both windows are open by equal amounts. It is this balance that is the best way to maximise the flow of air and to cool your room.

Hot air rises, so the warmest air in your room collects just below the ceiling and the coolest block of air is close to the floor. On a typical summer’s day the air close to the ceiling can easily be 5 °F hotter than that at floor level. So opening both top and bottom sashes by equal amounts not only allows the warm air to escape through the top of the window but also sucks in cooler air from outside through the bottom of the window. This removes unwanted hot air and also sets up a cooling breeze—the perfect antidote to those sweltering summer nights.

The researchers say that this strategy is most effective during the evening or at night when the air outside has started to cool a bit—provided that it is safe to leave your  windows open.

If your house still has its original shutters then they are an effective way of shading sunny rooms and keeping out the summer sun. But if you don’t have shutters, then don’t despair. Blinds are just as effective at shielding rooms from the sun and preventing your house from overheating.

The final advantage of period houses is their 11-inch thick solid walls. Modern houses are built with well-insulated cavity walls, which are great for keeping in the heat in winter but are not so good at keeping a house cool in summer. Most of the houses in the conservation area are built with bungaroosh, a mixture of broken bricks, flint, chalk and other miscellaneous rubble held together with mortar.

The ability of a house to stay cool in a heatwave is related to its thermal mass. Solid walls have far greater thermal mass than cavity walls because they are denser. As the sun starts to beat down the air is quick to warm up, but dense solid material like bungaroosh masonry heats up much more slowly and acts as a powerful brake on rising temperatures inside the house.