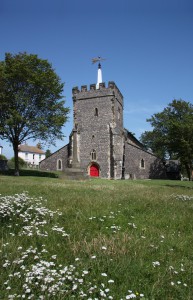 THE MCHA has expanded its area to include the medieval church of St Nicholas and its churchyard after members at the Annual General Meeting voted unanimously to adopt a new constitution.

The MCHA’s 41st Annual General Meeting was held on a blustery night at St Michael’s to the accompaniment of rattling stained glass windows. Members voted unanimously to approve the new constitution, by 30 votes to nil. There were no abstentions.

The new constitution is based on the Charity Commission’s model constitution for charities of our size and it replaces the old constitution, which dates from the days before there was even a conservation area.

The most important change is in the definition of the MCHA’s area. Under the old constitution our eastern boundary was Dyke Road. Now we include those parts of the conservation area that lie to the east of Dyke Road, notably the church-yard and part of Church Street as well as Wykeham Terrace.

There is also a significant change in the wording of our objectives. Under the old constitution we were only concerned with planning developments in our area–although in practice we frequently stretched a point. The new constitution makes it plain that the MCHA is concerned with any proposal that affects our area, and not just those that are physically within the area.

In the elections for the committee all those standing were elected unopposed. The only change on the committee is that Lori Pinkerton-Rolet has had to stand down because of the pressure of work. She is replaced by Michael Fisher, who lives in Wykeham Terrace–houses that are now formally part of our area. He is  secretary of the Wykeham Terrace Residents’ Association and on the Regency Society’s committee.