Oh, I do like to be beside the seaside 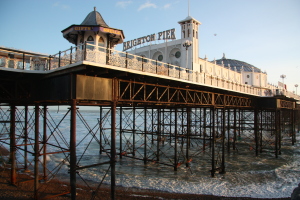 THE Palace Pier was the most expensive pier in Britain when it was built, said Ian Gledhill who gave the MCHA’s autumn lecture in 2013.

In a scintillating and hugely enjoyable talk Gledhill said that Brighton’s first pier was the chain pier–so called because it was a series of  suspension bridges, with the chains supporting the deck of the pier. The chain pier, built in 1823, was based on an earlier chain pier in Newhaven–not the nearby Sussex ferry port–but Newhaven on the Firth of Forth, near Edinburgh.

Brighton’s chain pier was destroyed by a storm in 1896. The West Pier, which opened in 1866, was the town’s second pier and the Palace Pier was finished in 1899.

The original purpose of the piers was to provide a landing stage for boats. But the coming of the railway  in 1841 and the subsequent introduction of cheap fares brought “the bag and bottle brigade” to Brighton–so called because they came down from London with their sandwiches in a bag and their beer in a bottle. Around this time it became the fashion for people to go for a stroll on the pier and piers started to develop attractions to amuse the public. The Palace Pier opened a concert hall in 1911 and five years later the West Pier built its concert hall. Neither of the concert halls survive. The Palace Pier was given temporary planning permission to demolish its concert hall in the 1980s. The intention was that it should be rebuilt. It has still not been.

But most of the attractions were far less highbrow. There were the end of the pier shows–with groups such as the Pierrots–the name was both a pun on pier and a reference to Italian burlesque characters. Then there were the coin in the slot machines that told fortunes and gave punters a print out.

A typical prediction, said Gledhill, was “you’re going on a journey”, which would certainly come true for all the Londoners who had come down for the day. There was also a mutascope–which produced moving images by flicking through a series of cards. And finally there was “what the butler saw”.

So what did the butler see? “Not a lot,” said Gledhill. “You’d just see a lady taking some of her clothes off.”